Throughout the 2012 season this site will provide up to date information, including which events we are competing in, race reports, riders blogs and any other team news 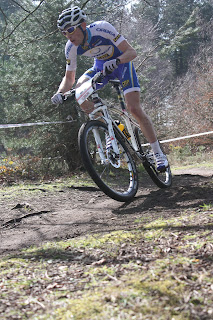 The national XCO series got off to a bang with full categories, flat single track, and with everybody super motivated for the new season the racing was fast and very furious. With new 26er and 29er Orbea Alma's, shiny new Bioracer kit, super light and plush Marzocchi suspension, and race proven CNP Cycling products all the team were ready for the challenge. 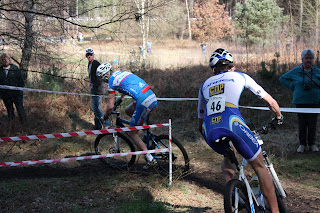 UCI C1 Elite race
Not since the cross country boom of the mid nineties has there ever been close to 80 elite racers on the startline, and with such a great turnout it proves that British XC racing is in a very healthy state and makes it a real spectacle for those watching on from the sidelines. John, who had made good progress throughout the winter improving both his power and his technical skills, was eager to find out whether this progress would show in performance.

Both our elite riders John and Oli, knew how important a good start was for a decent result at Sherwood. The course is very flat and very fast, making it extremely hard to move up through the field. For John the initial start wasn't so good, where as for Oli it was great, which led them going into the first piece singletrack line astern (John gridded 25/ Oli 46) in around 35th place. The long snake of riders then wound it's way through the first 2 sections of single track and with no room to overtake it was very much follow the leader.


Oli made a very costly mistake following John's wheel just a little too closely, he lost the front over an unsighted root. The bars got twisted and the chain derailed losing Oli 30 places and he had to re focus and start making his way back through the field. However his crash had wrecked the gear indexing and forced him to stop again and fix the problem, losing more time and leaving him mid pack in Expert category. Oli's race was practically over before it had really began.


For John it was time to find a wheel and move back through the field. The wheel of the legendary Nick Craig did the trick and them and dave Collins formed a strong Group and started picking off riders and moving up into the 20's. John continued to ride smoothly and fast and finally ended up 21st, just a few secs behind Nick and 12th British rider - a good solid start to the season and one that proved the hard work over the winter has definitely paid off.


For Oli he kept working hard, rode consistently on his own and pulled to back to 54th - showing real determination just to finish. 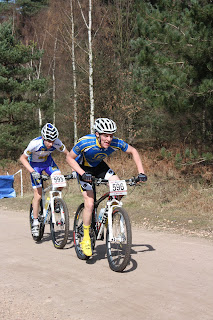 Junior Race
For our two Junior riders, Iain and Cameron, this was there first race as Juniors having moved up an age group over the winter. Neither had raced XC since the end of 2011 and were keen to get a solid start to season. Both had work to be done as result of being 1st year Juniors as they were gridded behind all the 2nd years.


''The start – which is usually my weakness – went surprisingly well for me considering I was gridded 18th, and I went into the first singletrack around 12th. This wasn’t ideal considering the lack of opportunities so I had to push myself to the limit just to make up 1 or 2 places. I went hard on this lap and found myself moving into 5th, with the leaders group of 4 having created a gap early on.
Riding by myself, I went for it, but my legs never quite had that snap they needed for the Sherwood course. I kept my head down and caught up with some guys who had been dropped off the lead group but was still trailing around 20 seconds off the leader. Going into the latter stages of the race I was sitting in 3rd with one of my ODP team mates – Mike Thompson - stuck to my wheel and going well!
Last lap I pushed hard but my legs felt heavy and my back was also hurting a lot. I tried a few small attacks but realised it was going to come down to a sprint finish for 3rd. Knowing that my sprint has never been great I made sure I was leading into the finish straight and went for it as much as I could. However just metres from the line Mike edged past me and pipped me on the line by less than a wheel length!
As nice as it would have been to get on the podium, I was really happy with my result, but know that my legs still have more in them! And from this I am excited to announce that I have been selected to race the Junior World cup in Houffalize, Belgium as part of team GB! ''


Cameron had a great race, moving up well from his 33rd grid position, picking off riders throughout the race and finally finishing impressively in 20th position, which has set him up for a much better gridding position for round 2. 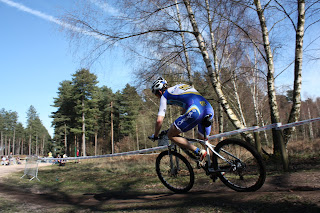 Masters
Darren, who had been suffering with Illness for the week before the race, arrived at the race unsure how his body would respond to the race. Sadly for Darren the Illness had take all of the zip out of his legs and he felt like he was going backwards on each of the fireroad stretches, Luckily his technical skills were present and correct and which allowed him to make up time in the singletrack section. Darren made it to the end rolling over the line in 32nd. A sterling effort given most wouldn't have started let alone finished!

Thanks to the support of CNP Professional, Orbea Bicycles, Marzocchi  Suspension and Bioracer clothing who provide the team with the very best equipment, nutrition and clothing available.


Next stop for the BCXC is Round 2 at Dalby, North Yorks.
Posted by CNP - Orbea Racing at 11:33 No comments:

Congratulations to John on finishing 2nd at last weekends Red Bull Hill Chasers aboard his Orbea Onix - Great first podium of the year.
Posted by CNP - Orbea Racing at 05:51 No comments:

For 2012 CNP - Orbea Racing are pleased to announce that Iain Paton will join the team.

After Matt's late decision to switch to the road, the team was left feeling sorry for those riders that had applied to join us earlier, but had been turned down due to a full roster of riders. However, through Cameron, we learned that the extremely talented Iain was without a confirmed ride and this gave us an opportunity to fill the space left by the departing Matt. The team are really pleased that we can once again support another talented young rider, who has the potential to reach the top in the Junior Category.
Iain will be a first year Junior for 2012, coming off the back of an outstanding final year in the Youth category. Below is a list of Iain's achievements.
Go to Rider Profile for more info.
Posted by CNP - Orbea Racing at 09:02 No comments: